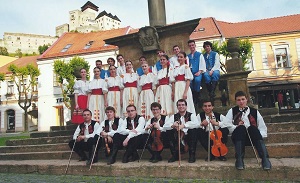 TRENČAN
the Folk Ensemble of the Grammar School of Ľ. Štúr in Trenčín SLOVAKIA

Folk ensemble Trenčan has been working at the Grammar School of Ľ. Štúr in Trenčín since its foundation in 1949. The teachers of this school lead it and its members are students of secondary schools, at the age of 15–19 years. They all devote their spare time to work in this ensemble.

Folk ensemble Trenčan ranks among the oldest and best ensembles in Slovakia. The main aim of the ensemble is to preserve the original folklore of the region of the town Trenčín (western part of Slovakia) and to adapt it in an artistic way. All the activities of the ensemble enable its members to know the folk traditions, to improve their aesthetic feelings and to teach them motion culture. More than 1400 members have worked in the ensemble up to the present time. Many of them formed here their relation to the folk art and many of them continued this activity after leaving the ensemble Trenčan in various folk ensembles at the universities in Slovakia. 110 choreographies have been created so far and about 20 of them make up the contemporary dance repertoire of the ensemble. The girls singing group and the folk music group make up the inseparable part of the dancing group. They both complete the programme and give also their own concerts and performances.

During 70 years old existence of the ensemble Trenčan it gave more than 2400 performances not only all over our homeland but also abroad. Regularly it took part in various festivals and competitions and it was awarded many prominent appreciations. Trenčan organized more than 650 performances in 31 countries of Europe, North America, Asia and Africa and everywhere the audiences applauded our dances and music. That is why we visited several countries more times.